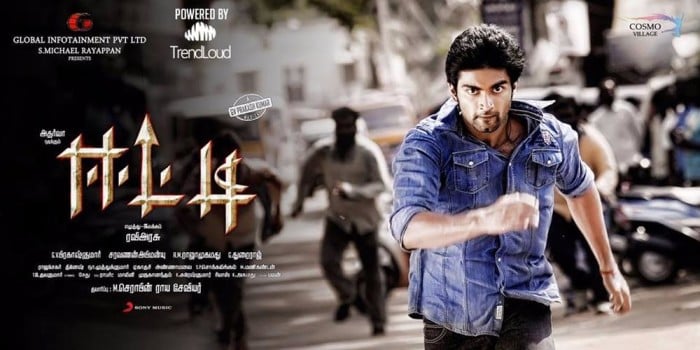 Eetti is the latest Tamil action film directed by Ravi Arasu and produced by S. Michael Rayappan and Vetrimaaran. The film features Atharvaa and Sri Divya in the lead roles, while G. V. Prakash Kumar composes the film’s music. Wikipedia

Eetti aka Eeti is one of the few Tamil Movies that are focused on Sports. Usually these Sports-Centric Movies receive a lot of attention among Audience.

Director Ravi Arasu gave a action-packed film this year with enough Romance, Comedy and every ingredient required by a Commercial Film.  Atharvaa as Pugalendhi aka Pugal is an Athlete based on Tanjore. He broke records on InterCollege Hurdle Race at National Level.

When he goes to Chennai for a Sports Event, He saves Gayathri’s (Sri Divya) Brother from a Fake Currency Mafia. He gets in fight with one of the important members of the Mafia and triumphs over him. So this makes him a target for the Mafia.

The Whole Story comprises of how the lead actor solves these issues. Actor Athaarva rocked as the lead actor with a well toned body for an athlete. Sri Divya looks cute in the movie.

Ajith Vijay out of Forbes this year