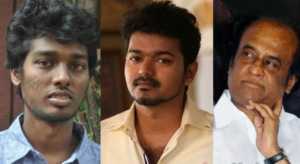 Atlee directing Vijay’s 59th film starring Samantha and music by G.V.Prakash is yet to be titled but according to kollywood news the title is expected to be the Superstar Rajinikanth’s Blockbuster movie “MOONRU MUGAM”.

PULI is getting ready to hit the screens soon directed by simbhudevan starring Vijay, Sri Devi, Hansika, Sruthi Hassan. However Vijay started working in his next film with Atlee.

All Directors starts their new film by keeping the Title for their respective movie, Ajith changed this trend in Yennai Arindhal and his 56th film with the director Siruthai Siva is yet to be titled,
until then it is titled as THALA 56 and Many of the directors following the same trend Nowadays.

Update: From a Trustable Source, We got the new Title ‘Khaki’ which is yet to be confirmed by the Vijay 59 Team

Dhanush’s VIP 2 is to release on Diwali