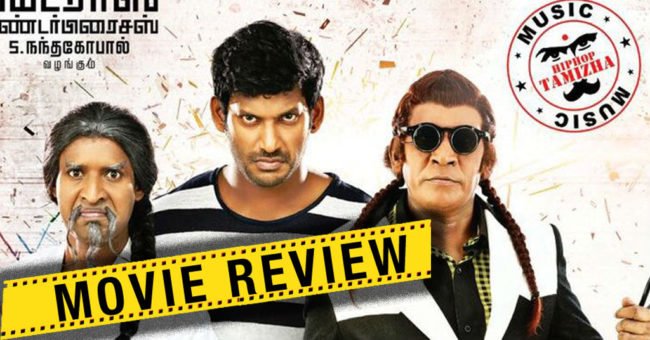 Kaththi Sandai (aka) Kathi Sandai has finally hit the screens after many postponements and prepondments. Vishal, Tamannah played the lead roles in the film and it is also a Comeback for the Legendary Comedian Vadivelu. Kaththi Sandai seems to be a Action thriller which has been dragged by some unrealistic fights and Scenes. The director of the film Suraj should have been avoided such Unrealistic sequences to keep the audience more engaged in the film.

The songs has came out well and it is one of the major positive in the film. As always Vishal entertains with the commercial elements. The Cinematography has been outstanding by Richard M. Nathan especially the foreign location scenes shows his intelligence in it. Tamannah adds Excitement whenever she appears onscreen and keeps the film moving. The comedy has worked out in some places and makes us laugh. The story doesn’t has much and it falls in the list of Regular Commercial movies.

The story begins with the investigation of a truck carrying millions of Rupees and the angry police officer Jagpathi babu investigating the case. The hero enters and romances with the beautiful Tamannah and the remaining plot is how the Hero fals into the problem and the rest of the film us followed by many twists.

Overall Kaththi Sandai is an Average flick which people can watch once to entertain themselves. It may satisfy the Commercial fans but the Weak story plot has been a major minus point of the film.