Namitha one of the contestant of Bigg Boss Tamil was eliminated 2 weeks back and after her return, she has slammed the People’s favourite Oviya and also claims that Bigg Boss is just a ” Hell-Hole” and criticized the directors for wrongly portraying them and altering the original footages.

There was a Poem written on a piece of paper started circulating in social media and claimed to be written by Namitha. You can read the poem below 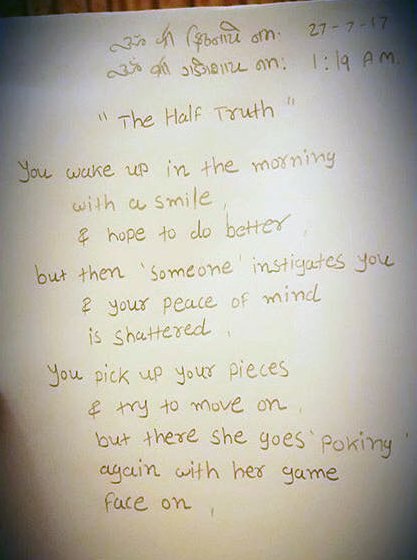 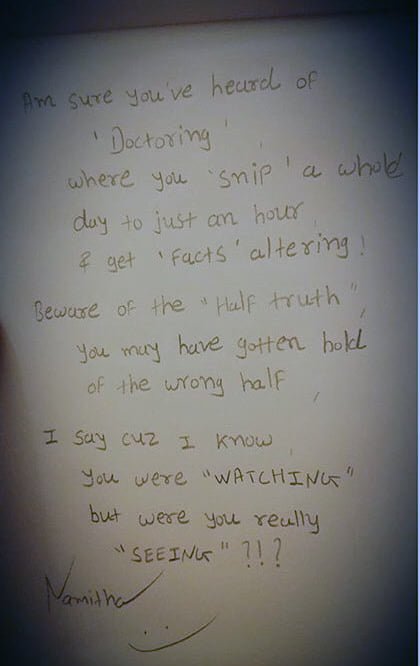 The Poem read as ” The Half Truth
You wake up in the morning with a smile and hope to do better
but then ‘someone’ instigates you and your peace of mind is shattered.You pick up your pieces and try to move on, but there she goes poking again with her game face on.One day you lose your temper cuz you’ve self-respect and your are a defender.You get all the fingers pointing and you can hear all the chatter.

You judged me on my portrayal when the show is as ‘bogus’ and the director are experts in betrayal.How easily you trust and think it’s unjust
Were you there in that ‘Hell-hole’ from dawn to dusk?.Am sure you ‘ve heard of ‘Doctoring’
Where you ‘snip’ a whole day to just an hour and get ‘facts’ altering!.Beware of the “Half Truth”.You may have gotten hold of the wrong half.I say cuz I know you were “watching”
but were you really “seeing” !!! “

Oviya Comes out of BB and Speaks with Kamal | New Promo