This 2016 Pongal will be special treat for Kollywood Audience . Because 4 Movies have to be release in January 15 .These 5 movies have high budget , Mega star value , Huge expectations and various genres. Let Us See the movies 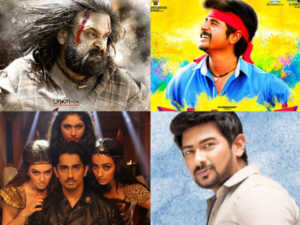 This film features by Director sasikumar and varalakshimi .The main expectation of movie is Bala . One of the best realistic director in tamil cinema . His last movie ” Paradesi ” also got the national award . The film revolves around Tamil folk dance “Karakattam” also it contained bala movie feature elements like vengeance , love , betrayal and realistic life .This movie also expect to get more national and international awards in this year . This movie is music director isai nyani “Illayaraja’s” 1000 th movie .

After the victory of nadigar sangam elections , Vishal will release his  movie . This movie directed by pandiraj who gives a  ” Pasanga -2 ” decent hit with surya . It is a action thriller movie and it has been based on true events . The main plot of story is  ho w just one incident can totally change a person’s life.” Music composed by ” hip hop tamizha ” , co -lead by “katherine therasa “. From audience point of view , it will fulfill  a racy entertainment  action movie .

The grand success of ” Varuthapadatha Valibar Sangam ” , this crew joined together for ” Rajini murgan “. It  is a comedy entertainment flick  that stars Sivakarthikeyan and Keerthy Suresh in the lead. The star cast also includes Soori, Kanaka, Samuthirakani and Rajkiran. The film is directed by Ponram and composed by imman .Rural based family entertainer with ample scope for comedy. The trailers have proved this point and we can go to the theaters expecting decent fun and entertainment.

It’s a story about a sniper from Indian Navy MARCOS. Everything about this character has been handled with subtlety and restraint . It is a first action movie of “Udhayanidhi Stalin ” career and which is directed by  Thirukumaran as the director of the hilarious hit Maan Karate . It’s a crime thriller which takes place in this village called Kumily, on the Tamil Nadu-Kerala border. The first half of the film is light with comedy and the second half has all the twists and turns. The film is just two hours as they’ve tried to keep it tight. Sathayaraj doing a major role of this movie , co -leads by amy jackson . Vikranth played a stylish suave villain .