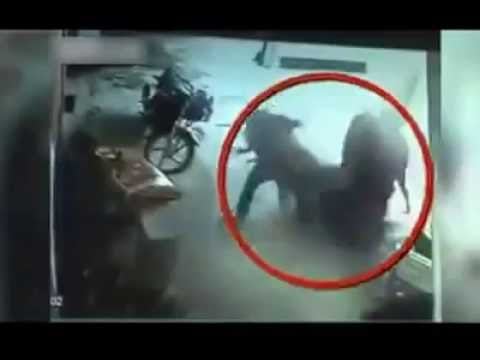 Gwalior: In a shocking case of ‘honour killing’, a 22-year-old girl was brutally hacked to death by her father and uncle in Madhya Pradesh’s Gwalior city.

According to reports, the victim had allegedly eloped with a man identified by the police as Sonu, who was later arrested after the victim’s father filed a complaint.

The victim was asked to return to her home in Pahadigaon in Morena district by the police officials, which she refused. She was then sent to a women’s shelter run by an NGO.

While staying at the shelter home, she was attacked and killed by her father and her uncle. Both the accused are absconding and a manhunt has been launched.

In a different twist to the case, a CCTV footage has emerged which shows the victim being thrashed by her relatives when a cow comes to her rescue.

The cow can be seen trying to protect the girl from her attackers. Without wasting a second, the animal broke the chain with which he was tied up and jumped on the attackers. He grabbed one of the attackers, who got severely injured in the tussle.