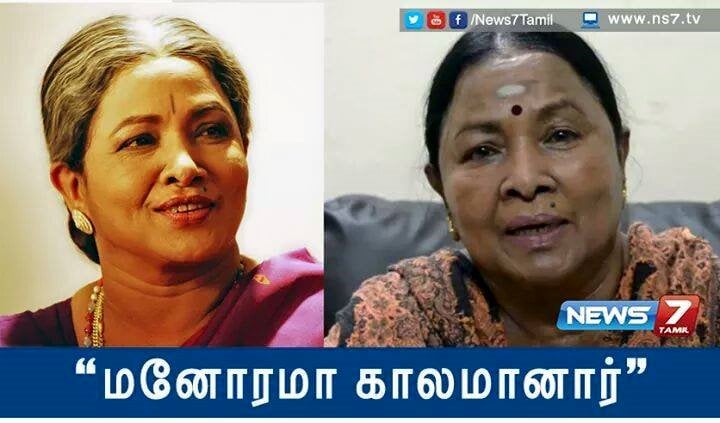 Legendary Actress Manorama Passed away today and almost the whole industry was schoked . She was kindly called as ” Aachi ” by her fans and the whole tamil industry !
She has acted in more than 1000 films and 1000 stage dramas and also in some TV serials.

She is also found be one of the greatest female Comedian !

She has shared screen space with all top actors and actresses for generations. She is only second to Sukumari in most number of films acted.

She also has a unique record for being able to work with five Chief Ministers of Andhra Pradesh and Tamil Nadu. She played the female lead in the plays written, directed and acted by CN Annadurai, former CM of Tamil Nadu. She has also appeared in plays with M Karunanidhi.

She was awarded the Padama shri in 2002. She won the National Film award for best supporting actress  for the movie Pudhiya Pathai in 1989. She was the recipient of the Kalaimamani award by the government of Tamil Nadu. She holds a Guinees world record  for acting more than 1000 number of films.

Cho ramasamy claimed on the Tamil TV show Koffee wid anu  that he was the first one to call Manorama the female Sivaji Ganesan : He admired her for her versatility and the ability to surprise with her performances