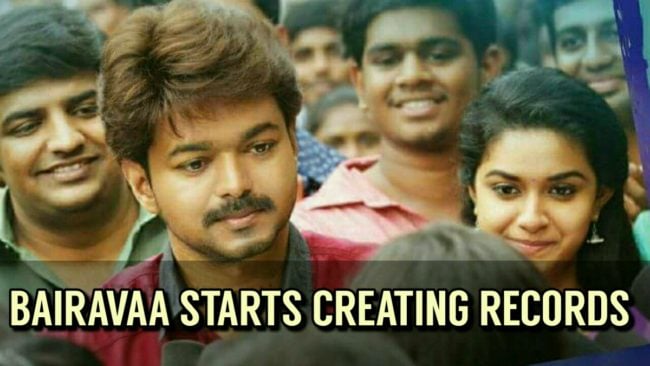 Bairavaa, The upcoming movie of Ilayathalapathy Vijay which has been the most trending topic of Kollywood town in recent times. The film has been directed by Bharathan. The team has planned to release the movie on pongal. It is one of the most expected movie of 2017 which is all set to rule the Boxoffice. In this movie for the first time keerthy Suresh pairs with Ilayathalapathy Vijay. The movie’s music has been composed by Santhosh Narayanan and the songs released recently has been a big hit .
Expectation for the movie has been increased to sky level. It is expected that the Film’s distribution rights will break many previous . Now latest news is that Chengalpet area distribution rights has been bought by lateef Ravi of Trident Arts for a Big price and he will distribute Bairavaa in Chengalpet area. Get set Kollywood fans, A big January is waiting for us!!