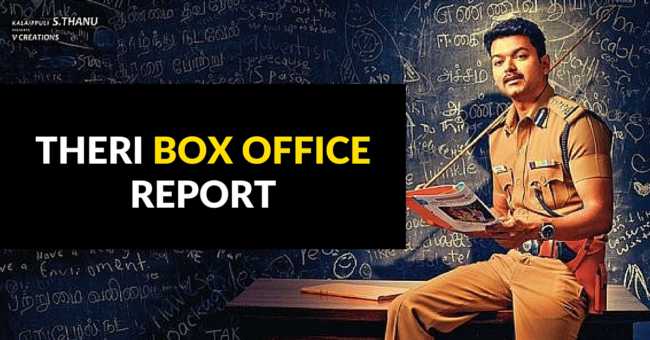 Theri is an Indian Tamil-language action film written and directed by Atlee and produced by Kalaipuli S. Thanu. The film features Vijay, Samantha and Amy Jackson in the lead roles, while Prabhu and Raadhika Sarathkumar amongst others form an ensemble cast. Featuring music composed by G. V. Prakash Kumar and cinematography handled by George C. Williams. The film had a worldwide release on 14 April 2016. It will be dubbed into Telugu and released as Policeodu (English: Police Man) Wikipedia

In its first four days, the movie has raked in Rs. 85.36 crore. While “Theri” has earned Rs. 51.42 crore from India, it has minted Rs. 33.94 crore from international centres, claim andhra pradesh

Theri has crossed the 100 Crore Mark before the completion of the first Week.

(Day 1-6) TN 50Cr+ Kerala (10Cr) + Overseas (30Cr) + Karnataka and AP. #Theri Has Joined Prestigious 100Cr Club in 6 Days of Release. Watch and enjoy this movie in your near theatres. Share your thoughts about this film. To get all Updates, Stay tuned with us.