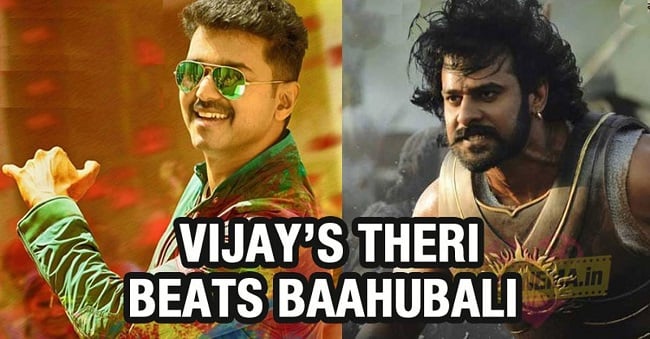 Theri Movie Beats Baahubali Records: Ilaya Thalapathy is now in the mood to break some records and also create new ones. His latest release Theri had already created some by breaking some. At first it broke Vijay’s own record he made through Kaththi. Kaththi had grossed a record 12 cr+ from its opening day from Tamil Nadu.

In its first four days, the movie has raked in Rs. 85.36 crore. While “Theri” has earned Rs. 51.42 crore from India, it has minted Rs. 33.94 crore from international centres, claim andhra pradesh. By this Collection, Theri broke the record which Baahubali made on the First Weekend.

“Theri” had collected Rs. 28.96 crore worldwide on the first day. But the collections witnessed a huge drop at the domestic centres the following day, although the business picked up on Saturday and Sunday. However, in the international centres, the Vijay-starrer remained strong. The movie enjoyed good occupancies throughout the first weekend in the U.S., U.K., Australia and France.

Theri, which stars Vijay, Samantha and Amy Jackson, is written and directed by Atlee Kumar and produced by Kalaipuli S Dhanu.